The Fuss: Teaching in an Age of Trigger Warnings and Micro Aggression

We covered all the pertinent philosophers, from Aristotle and Confucius to Clifford Christians and Sissela Bok. Readings, lectures, discussion and various journal exercises helped students understand ethical values such as influence, responsibility, truth and fairness. Then they research professional organizations’ codes, including ones from the Public Relations Society of America, the American Advertising Federation and the Society of Professional Journalists, among others. They also research corporate codes of ethics, and identify firms that share their values and perspectives.

Before the Internet—in the 1980s and early 1990s—students would design brochures, media kits, posters and other creative materials that showcased their personal codes, aligning them with mission statements and codes of associations and prospective employers.

Here’s a montage of posters, brochures and pamphlets from Ohio University students in 1995: 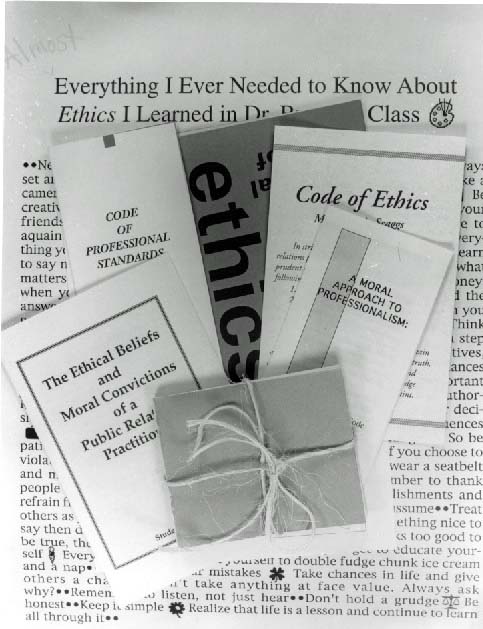 Like everything else in advertising, journalism and public relations, Internet and social media began to appear in final projects, first in the early 2000s at Ohio and then increasingly over the years at Iowa State University.

Now ISU ethics students across disciplines (this class admits non-majors) not only learn the tenets of philosophy and analyze case studies involving ethical principles; they also must design online portfolios that include work on at least two platforms and that share personal codes in stand-alone tabs.

My ethics class is online. You can check out the site at www.myethicsclass.com (yes, I secured that domain). Here is a montage of some 2014 works by this class:

At the start of the course students are shown a presentation explaining the basics of portfolio design. You can access this presentation by clicking here.  Throughout the semester my teaching assistant and I critique portfolios in progress. At the end of the course, we feature on our Web site a selection of work produced by students majoring at the Greenlee School of Journalism and Communication as well as other departments from all colleges at ISU.

We found that basic ethics tenets apply to every discipline from agriculture and criminal justice to mechanical engineering and military science. You can view the wide selection of portfolios and codes on the “portfolios” tab of my Web site.

In teaching evaluations, students praise the final project—not only because it helps place them in internships and jobs. They also appreciate how ethics is the foundation of each discipline.

“The portfolio assignment was incredibly useful to most of us as many in the class will need a polished portfolio to get an internship/job,” one student wrote.

Another stated, “I liked that we came out of class with an online portfolio that will actually help me get a job! VERY helpful.”

Other students echoed those remarks.

Each semester more portfolios are added to the site. Graduates maintain them, too, so students in my class can actually follow careers. (Note: Before we post portfolio URLs, we ask students to sign a release form.) We also keep a list of specific portfolios that played a role in securing jobs and internships for our students.

They have an edge in the job market because their work ethic and samples are supported by ethical values as well as carefully aligned and researched codes.

How can professors best introduce provocative material in the classroom in an age of trigger warnings, microaggressions and tweeting? Michael Bugeja tackles the issue.

I recently moderated a First Amendment panel at Freedom Fest, a largely conservative and libertarian conclave, meeting at breakfast with two speakers, Robby Soave, associate editor of Reason.com, and Charles C. W. Cooke, editor of the National Review’s website. Both were curious about political correctness on campus.

I was eager to have that discussion with two national journalists whose publications question the use of trigger warnings and microaggressions, two components of the current PC debate. I had another side to express: that the media may be focusing overmuch on incidents that seem to threaten academic freedom. I wanted to explain what the fuss is about and why professors like me provide advance notice about sensitive or politically charged content and also recognize the cumulative impact of microaggressions, or relatively minor biased words, phrases or topics.

I teach media ethics at Iowa State University. On the flight to Freedom Fest, I had been mulling over how I would introduce to my class a comment that Benjamin Franklin made in reference to whether slaves were people — a contentious topic in the modern American classroom.

I had been reading The Quartet: Orchestrating the Second American Revolution (1783-1789) by Pulitzer Prize-winning author Joseph J. Ellis. In a section on the Continental Congress debating taxation policy, a prickly topic at the time, Ellis discloses what no delegate wanted to broach — slavery — the proverbial elephant in the chamber.

The debate on taxation forced the issue of slavery to the floor. Here is how Ellis describes it:

“The delegates from the Southern states insisted that slaves were property like horses and sheep, and therefore should not be counted as ‘Inhabitants.’ Franklin countered this claim with an edgy joke, observing that slaves, the last time he looked, did not behave like sheep: ‘Sheep will never make any insurrections.’”

I wanted to use this exchange to update a lecture on roots of racism. But I was stumped as to how I might introduce it with (or without) a trigger warning. Like thousands of my colleagues, I give such warning regularly because we cover herds of elephantine subjects in media ethics, including sexual assault, religious extremism and race relations. Warnings provide context, not self-censorship or class dismissal. As such, I had been concerned that the word “property” might upset students of color because microaggressions can accumulate over time to a tipping point.
There is more here than meets the anti-PC eye. The word “property” was operative in the 1857 Dred Scott v. Sandford decision by the U.S. Supreme Court, deemed to be one of the worst miscarriages of justice in the United States. All students of color in my classes studied this case. Scott, a slave, had lived in the free territories of Illinois and Minnesota and sought freedom on that basis, only to be informed he was not a citizen but a piece of property akin to cattle.

My intent was to demonstrate that founders like Franklin foresaw the idiocy of this contention some 75 years earlier. Nonetheless, students of color cringe at the word “property” associated with their skin color and heritage. They have heard this term before. Repeatedly.

There is a popular video about stress noting that a cup of water weighs about eight ounces, until you hold it for an hour or longer. Then it weighs a ton. Weight doesn’t count; time does.
Explaining this to my Freedom Fest panelists, I beheld the look on their faces, from bemused to shock. Just say it! After all, I am a professor and students are paying tuition for the information.

Michael Bugeja questions why foundations and universities seem unworried about the way technology and certain business practices are eroding the role of the press.

Satirist Jon Stewart and activist Julian Assange are symbols of a world without journalism — a largely online marketing-based, consumer-driven world at odds with principles of democracy and freedom.

Stewart is often considered a journalist because he holds people accountable when many metro media outlets no longer do so in their downsized newsrooms. “The Daily Show” does this often by following up on what newsmakers did or said in the past and then comparing that to current, contradictory actions and statements. Wikileaks purportedly holds people and governments accountable. It does so, however, by “WebThink.” Whereas responsible journalists scrutinize motives of tipsters and fact-check authenticity of cables, WebThink just dumps it all on the Internet and lets computer chips fly where they may.

In this brave new media world, you learn about a crisis when it has reached unmanageable proportions, such as happened in the subprime housing debacle at the roots of a recession that has slashed budgets at colleges and universities. And that is why educators everywhere should be concerned about the demise of global journalism, networks of trained reporters and editors generating content on the scene in national and international bureaus. We no longer live nor educate in that world. By elevating access over truth, ours has become a world that reacts via commentary rather than prevents in advance of calamity.

Sadly, some of the leading technology companies, foundations and journalism schools not only haven’t resisted these claims, but may be encouraging them.

Recent incidents demonstrate that students have no idea about the implications of their lives online, writes Michael Bugeja.

Earlier this semester a media law professor asked me to prepare a lecture on privacy to present to his class while he was out of town on business. Subbing, for me, is an opportunity to delve into topics that might have changed since the last time I taught a particular class. So was the case concerning the four types of privacy invasion:

Unless you have been the focus of an online news story, you may not have pondered how anonymity topples the intent of privacy law, allowing trolls to intrude on your peace of mind, reduce you to a caricature, disclose private facts, and place you in an unflattering light. Nevertheless, occasions occur in academe that demand our intervention, such as harassment in virtual worlds, which can include incidents of racism, sexism, homophobia and even avatar sexual assault. …